Near-record low temperatures be damned, it's spring at our household. We're getting raised beds ready, planting seeds, and figuring out where to put those seeds when they become plants that require light and warmth. 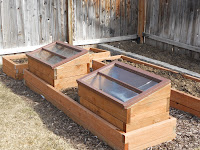 The Boyfriend finished redoing the cold frames. The paint had almost entirely peeled off during the winter, so he stripped and sanded them, primed them, then gave them a nice fresh coat of paint to match the house. Leave it to the Boyfriend to make sure our garden is color coordinated with our house. I would be so low class if it wasn't for him.

Meanwhile, I built a new home for this year's seedlings. I found out that I have 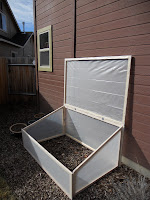 been misleading some of you into thinking I built a greenhouse. That's probably because I called it a greenhouse. But really, it's kind of your fault for believing I could build anything that has "house" in the name. In any case, it's really just a giant cold frame so we can store seedlings outside until they're ready for planting in the garden. 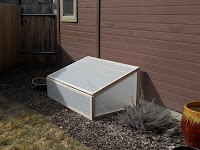 My construction job wasn't perfect--and my engineering work even less so--but it felt good to make something. And by "feel good" I mean an emotional feel good. I couldn't walk for three days after the construction project because my legs were so sore from squatting down on the ground and kneeling on the garage floor. In any case, I hope it at least works for this season. It's held together with hinges (and a few magnets--don't ask), so if it does make it through this season it shouldn't be too bad to store. For a good greenhouse option check out the Cast Iron Idaho blog--a great food and garden blog by my friend Katie.

On January 23, I planted some onions seeds--both for green onions and the new Ailsa Craig onion seeds. I've since transplanted the Ailsa Craig seedlings into a bigger container and transplanted the green onions into the cold frame just to see if they could make it. They actually seem to still be alive, which I'm quite surprised about since it was 9 degrees when I woke up this morning. 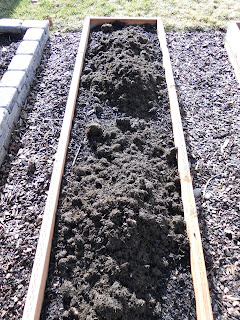 While I was planting, the Boyfriend was spreading our very first batch of compost. Most of it was frozen, so it was quite a task, but the bin was full and we needed to start a new batch in the space. It was great to have our own compost and think about how much stuff we didn't throw into the trash and instead turned into nutrients for our garden. Cue the Lion King music--it really is the circle of life. 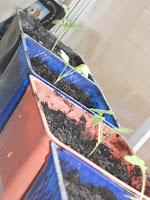 On February 5, I planted broccoli seeds. I know most people don't do broccoli from seed, but I thought I'd give it a try. So far so good. We've got 9 little broccoli plants that just today I transplanted into bigger pots. We really only need 4 plants if they're anywhere near as productive as our broccoli plants were last year. I think I'll try to put one or two out in the new cold frame 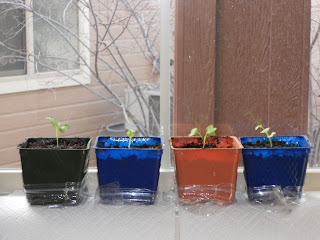 /green house (let's just call it the cold house) to see if they can make it outside.
Posted by elj at 11:57 AM

Proof that I am an Idaho native